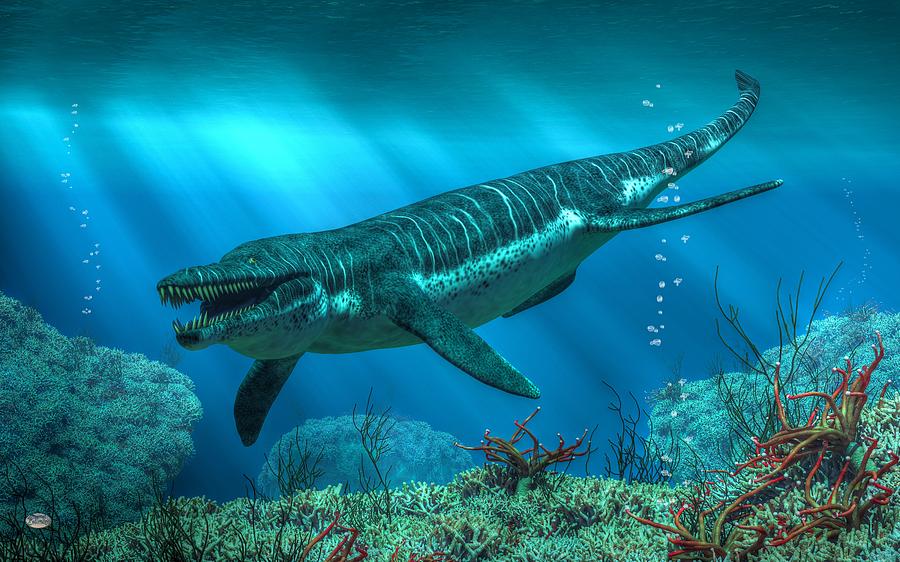 Kronosaurus was a marine reptile that lived in the ocean during the early Cretaceous period at the same time dinosaurs roamed the land. Though sometimes called a dinosaur, it is technically a pliosaur which is different from dinosaurs. They were large, only a little shorter than the average length of a school bus and preyed on turtles and plesiosaurs and possibly giant squid and elasmosaurs. It is named for the ancient Greek titan Kronos.


About how I create my artwork:

Rather than traditional forms of art such as painting or photography, I use a computer to create my images., It's called 3D Rendering and works like so: I make a scene by sculpting and arranging digital models in a virtual 3D space., After stipulating lighting and atmospheric effects, I have the computer create a simulated environment from which I take a virtual snap shot of the scene. Then, using image editing software and something more akin to traditional painting techniques (via a Wacom tablet), I go over the work adjusting colors, adding brushwork, painting in details, etc. to produce the final image. Software I use includes: Sculptris ZBrush, Blender3d, Vue, Daz Studio, and GIMP.

Thanks for the feature, Claude!

Love the whole underwater effect. wonder if this related to the manatee??? L F

WOW! looks like I could reach out and touch him...(not that I would want to, scarey!)