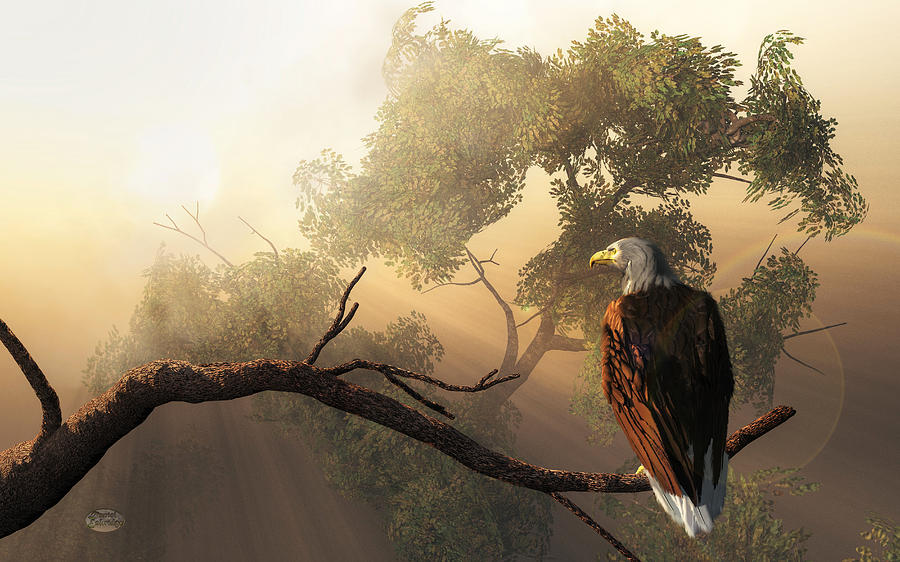 A bald eagle sits perched on a bare gnarled tree branch and watches the dawn. The rising sun is nearly lost in the morning haze, but its light, shattered into thousands of rays by the leafy top of a tree that stands between the sun and the bird, blazes across the scene. The magnificent raptor sits with its back to the viewer, yet it turns its head in profile as if to look back over its shoulder at you.

I've made a few images featuring predory birds (hawks and owls), but this image was my first to have an American bald eagle. Originally, I had not really planned what kind of character I would use in this artwork. It was mostly about creating a sunrise scene and what I could do with the light. Once I saw it though, I thought it was the perfect setting for an Eagle.

I made this using digital CGI and painting techniques. The bird was posed in Poser then exported to Vue for rendering. The rest of the scene was made in Vue. I used GIMP and Photomatix to do the post production work.

Outstanding composition, lighting, shading, color and artwork! F/L voted for this piece in the contest A ADULT EAGLE

Beautiful work, Daniel! Congrats on the high finish in the contest! L/F

Congratulations on your 2nd place win in the ABC Group's weekly contest, E IS FOR EAGLE. Wow.. what an amazing image! It will be proudly featured on the ABC home page this week! LF

I love the somberness of this digital rendering. Very nice

So, so beautiful, as always. The morning light and rays are just spectacular.

Thanks for the feature, Mia!

Nice! Love how the eagle is looking into the beautiful light! f/v

Thanks for the feature, Michele!