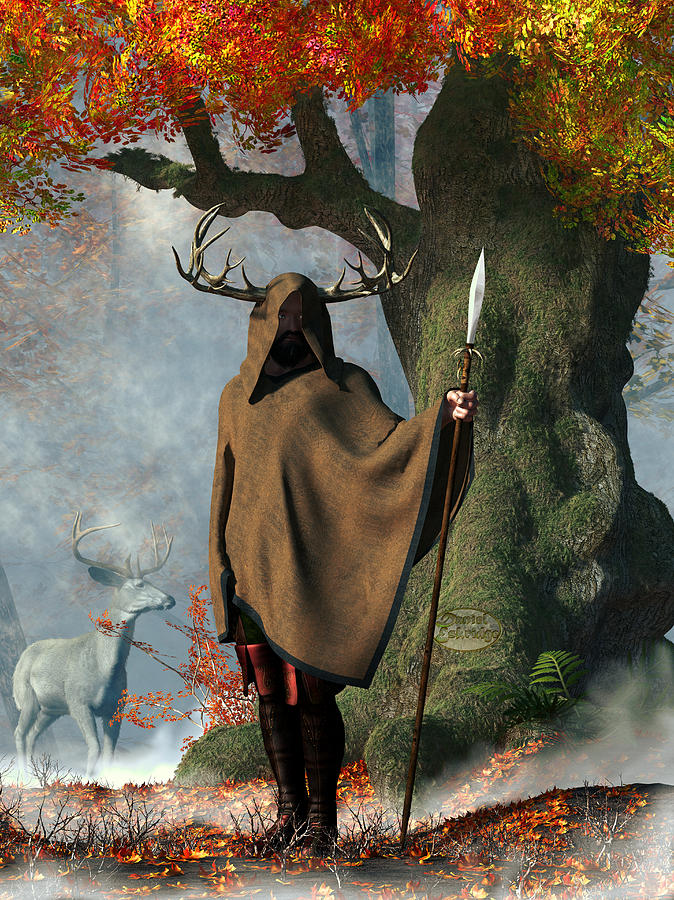 A hooded figure stands among the fallen red autumn leaves before a great mossy oak tree. Antlers sprout from his head, and, in his hand, he holds a spear. Behind him, a white stag looks out from the dense foggy forest.

Here is a work for Halloween 2012. This is Herne the Hunter the ghost of English folklore who haunted Windsor Forest. Falstaff dresses as him in Shakespeare's "The Merry Wives of Windsor". There little written history as to his origin but it is said that he was a keeper of the forest who hung himself from an oak tree, ever after known as Herne's Oak, for some offence. Another version of the legend has him killed by a white stag while protecting King Richard II. Some scholars believe, though, that he is another version of an ancient Celtic deity, Cernunnos, The Horned God (who is also thought to be one of the origins of the horned humanoid image of the Devil).

Love your work with the "old ones" subject matter. This one is a wonderful story and the work lovely! f/v

Thanks for the attention about my works and for adding me to your watch list and many many compliments for your art!

Great job on this one, Daniel. Excellent composition, as always. Vote.

Outstanding work Daniel, as always I am in awe of your talent! f/v

Gorgeous work, Daniel! I'm always amazed at what you can create. f/v

Love this as I am a massive fan of folklore and Herne is a fascinating subject, you have done the tale proud. v/f.

Daniel, Wow! I am in awe of this. Fabulous work. The description is very interesting. F/V