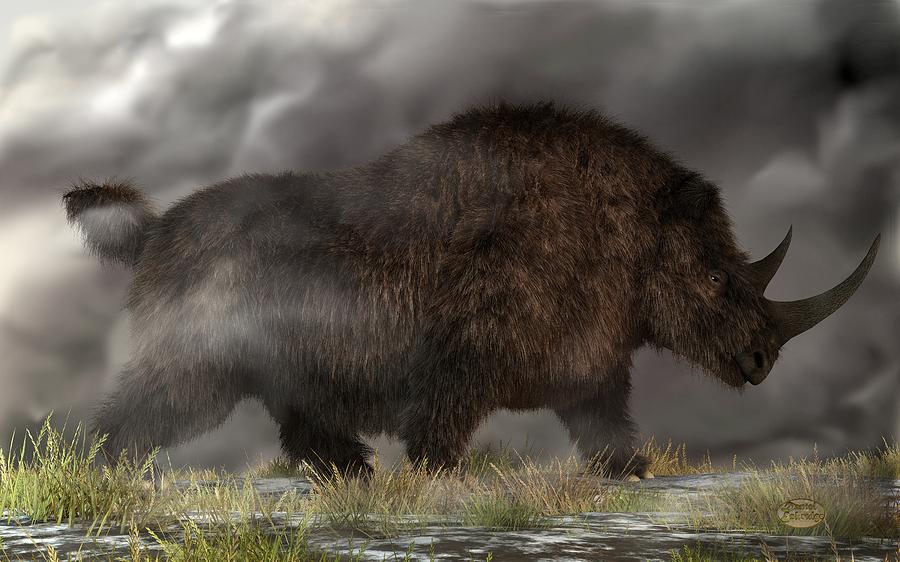 A shaggy beast emerges from the mists of time. This is the Woolly Rhino, Coelodonta Antiquitatis, a species of rhinoceros that existed during the last Ice age. He stands in a grassy clearing with hints of snow tracing the ground. A dense fog, or perhaps smoke from a nearby grass fire, almost completely envelopes him.

I haven�t done much paleoart lately, but I'd been getting the itch to create a prehistoric animal artwork lately, so here is the latest in my extinct creature series. I've made art before depicting the wooly rhino. It's one of my favorite of the Pleistocene megafauna, but I was trying a new fur technique with this one, and I think it turned out rather well. I went for less scenery in this one and went with a more textbook illustration feel. Hence, I have the creature in profile and eliminated any details in the background.

A disclaimer about my paleoart: When it comes to paleoart, the images I create favor 'art' more than 'paleo'. While I try my best to depict animals as accurately as possible, I'm make no claim that they 100% scientifically accurate. The same goes for the environment I depict them in. I am primarily interested in creating aesthetically pleasing images and paintings. Scientific accuracy comes second behind artistic expression.

Congratulations on your sale Daniel!...F/L

Many thanks to the buyer in Atkinson, NH!

Daniel, Wooly Rhinoceros is a prime example of why I`m such a fan of your Paleo art. I feel as if I`m there hiding behind a rock watching this awesome creature as he passes by...more gold buddy...L/V...WOW

So cool and a great work!

This is amazing work!

Thanks, everyone, for the wonderful comments!