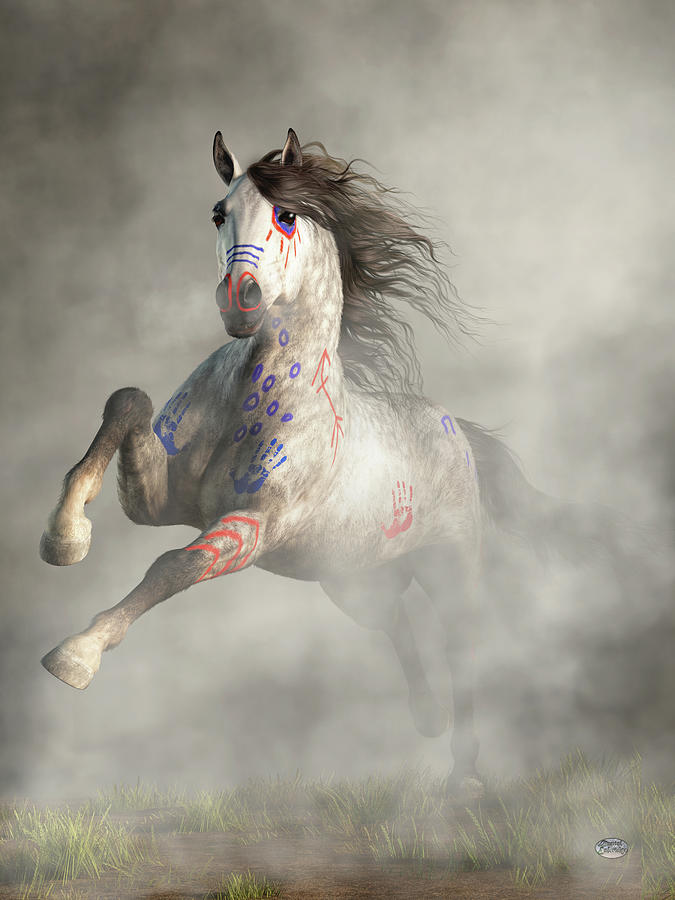 Out of the fog, a powerful horse gallops wildly towards you. This fearsome dapple grey wears red and blue war paint an looks ready for a fight.

From the artist: I created this in March of 2022. I was mostly trying out different poses for horses and really like the way this one looked. I gave him a dapple grey coat to work with the fog in the background almost as if the horse were be formed of the mists themselves.

A guide to the meanings behind the markings:

Lines on its face represent victories in battle.

For keen senses, it has the sun painted around its eye and circles around its nostrils.

The blue circles are hail to rain down upon enemies.

The arrow on its neck is a sign of victory.

The handprint on it hindquarters means it has accomplished a mission.

A symbol for a snake is on its hind leg, and above that, blue horses for captured mounts.

A cross on its flank is for escaping an ambush.

I love the mystical, magical feel to this, though this war horse could certainly emerge from the smoke and dust of a battle. Thank you for explaining the war paint. I love lightning painted on, summoning its power. I have read American Indians would often admire an enemy and his horse for the beauty of their regalia before engaging them in battle. Cheri Ceridwen

This is absolutely spectacular! Well done! Congratulations on your Best of the Best in WFS! FL

Congratulations on your Best of the Best feature in WFS! f

Daniel, Congratulations on your Feature in BEST OF THE BEST OF WFS FINE ARTISTS !

Congratulations on your “Best of the Best” feature! Wonderful work!

Congratulations Daniel on your best of the best feature in WFS group.

Congrats on your Wisconsin Feature Daniel, such a beautiful image!!

Dear Wisconsin Flowers and Scenery Group Member, You are to be congratulated on your achievement of getting your beautiful piece of artwork chosen to be featured in our “Best of the Best” section of our homepage. This is truly an honor to be selected for this special feature. If your works are featured, it is always an honor, but this honor is above and beyond what one sees most of the time. It is excellently done and presented and deserves a special place on our homepage. Happy sales to you till we meet again.

Congratulations on your Best of the Best homepage Feature of the Week in WFS!...L

Beautiful work, Daniel!!! CONGRATULATIONS, your work is featured in "Your Best Work"! I invite you to place it in the group's "Featured Image Archive" discussion thread and any other thread that is fitting!! 😊