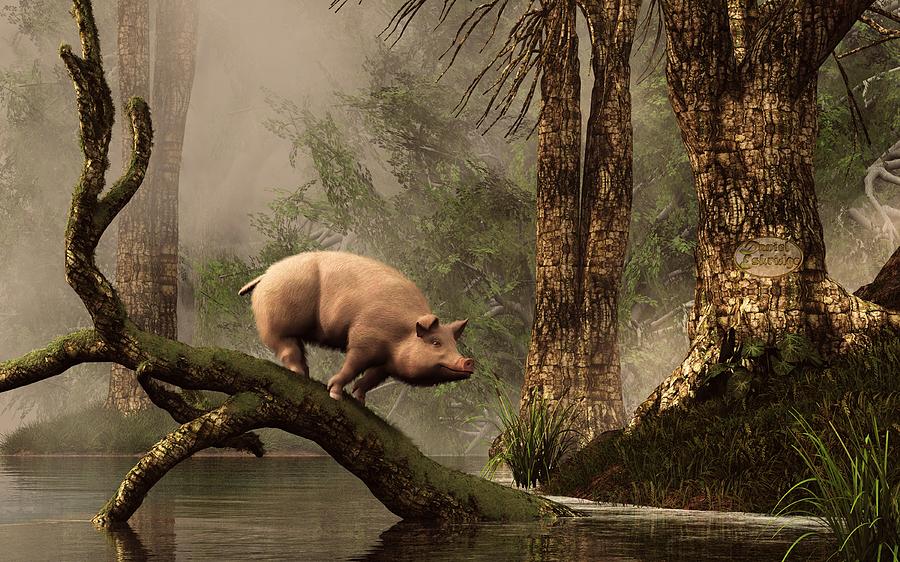 This little piggy looks like he might be in trouble. He's lost in a flooded forest and appears stuck on a fallen tree as the waters rise around him. But don't worry, pigs can swim :)

I actually had no idea that pigs could swim until I one day visited a now defunct amusement park in San Marcos, Texas called Aquarena Springs. They featured a 'Swine Diving' Pig named Ralph that could indeed swim. The park closed and the area is now a research center for Texas State University.

Poor piggy but what is he doing in that beautiful place...fun and lovely pig!! F/V.

Cool! I love this series, Daniel. Heck...I must admit that all of your work is fabulous. This is no exception. I love the expression. f/v

What a fun, imaginative and beautiful scene ... but poor piggy!!! Well, a good swim will cool him off (as long as you didn't put any 'gaters under the surface of those glassy waters??!!!!) Great, fun, whimsical image!!!! Love it!!! f/v

I love your pigs! From his expression, this one is feeling optimistic about getting back to shore, and he may even be enjoying the adventure. :)

Oh God.. this is so hillarious...hope someone buys this print and it will surely bring a smile to the person who looks at it :)))

love it, brought a smile to my face.

No matter what setting you put them in your pigs are so cool.

Always a pleasure to checking out your work Daniel.

Another great one Daniel..

It made me smile how the pig stands on the branch. Very funny idea!

This made me laugh, Daniel. He certainly does not belong on that branch. Wonderfully detailed digital work. :)