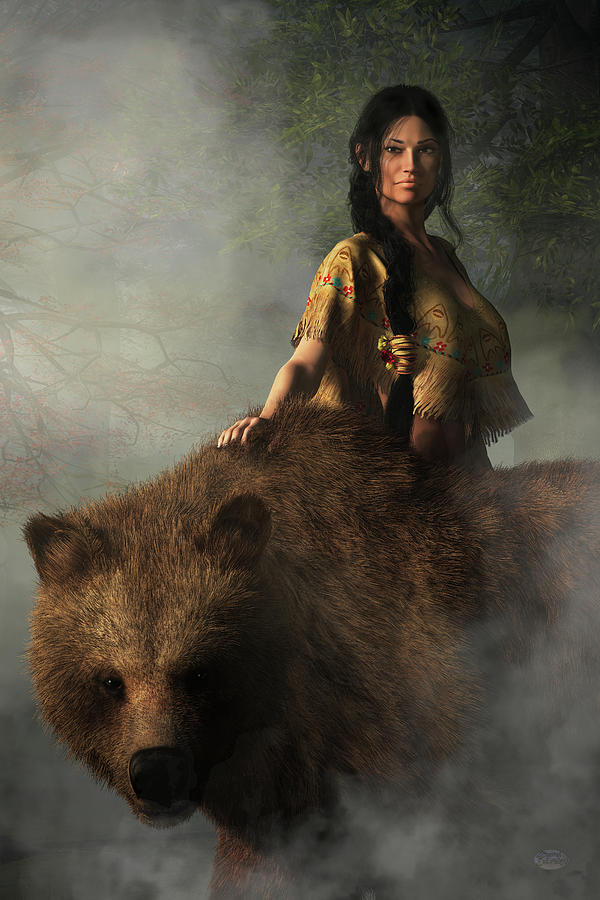 An American Indian woman rests her hand on the back of huge grizzly bear.  The bear stands protectively between you and the woman as both glare at you.

"The Bear Woman" is a Blackfoot legend about woman who takes a bear for a husband, then later becomes a bear herself and causes great trouble. Here is the (very) short version:

A young Native American woman refuses to marry.  Every day while her father and brothers are out hunting, she disappears leaving her little sister alone for long periods.  One day, her sister followers her and finds that she has taken a bear as a husband.  The little sister tells their father who, with his sons, kills the bear.  Later, the bear woman gains the ability to transform herself into a bear.  She kills most of people in the village.  Her brothers develop a plan to lure her into a trap.  They have the younger sister anger the bear woman who takes on her bear form again and chases her, but the bear woman figures out the brothers' trap and chases them all.  A pursuit ensues involving much magic.  The bear woman is eventually killed by one of her brothers, but having no people to return to, they all decide to go up into the sky where they become the stars of the Ursa Major constellation.

I've actually illustrated this story before.  I've always rather like the story, and I decided, since I've been creating a lot of bear themed images as of late, to create another.  For this one, I got much closer to the characters, making this more of a portrait.  For my previous illustration: https://daniel-eskridge.pixels.com/featured/the-bear-woman-daniel-eskridge.html

I've made my choice and it was out of three, only Bear wife spoke the loudest. Great art work

This piece of fine artwork has earned the honor of being chosen to show off to other artists and prospective buyers here in the Wisconsin Flowers and Scenery group. It is an honor to share this piece of well composed and beautiful art on our Featured section of our homepage. Thanks much for sharing! Liked and Faved Randy B. Rosenberger (administrator of the WFS group)