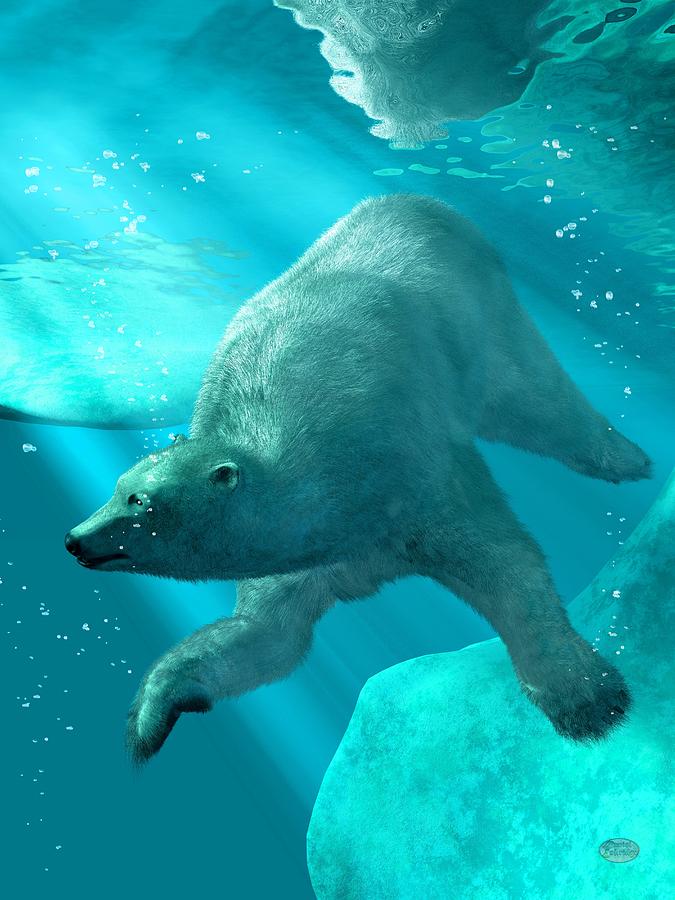 Polar Bears are the only species of bear that spends most of its time at sea. In fact, the scientific name for the polar bear is Ursus Maritimus which literally means "Maritime Bear". Generally it rides on sea ice, snapping up seals at the water's edge. However, these great white bears are also great swimmers and even show aquatic adaptations such as the ability to close its nostrils while submerged.

With winter officially under way, I was in the mood to make a freezing cold artwork that was heavy with blue and white tones. So I decided that adding polar bear to my series of mammals

Rather than traditional forms of art such as painting or photography, I use a computer to create my images. It's called 3D Rendering and works like so: I make a scene by sculpting and arranging digital models in a virtual 3D space. After stipulating lighting and atmospheric effects, I have the computer create a simulated environment from which I take a virtual snap shot of the scene. Then, using image editing software and something more akin to traditional painting techniques (via a Wacom tablet), I go over the work adjusting colors, adding brushwork, painting in details, etc. to produce the final image. Software I use includes: Sculptris, ZBrush, Blender3d, Vue, Daz Studio, and GIMP.

Congratulations on your Top Finish in the contest… POLAR BEARS! F/L

Congratulations on your top finish in the Polar Bears contest! voted l/f

Fantastic work and so lifelike, Daniel. The turquoise tones are stunning. L/fv/tw/g+

Stunning detail and beautiful light in this image!

Love this is so beautiful !!! lfv

Love this one ! Its so cool seeing them underwater F/L

This is wonderful! F&V

This is truly amazing Daniel....something so peaceful about it. v/f