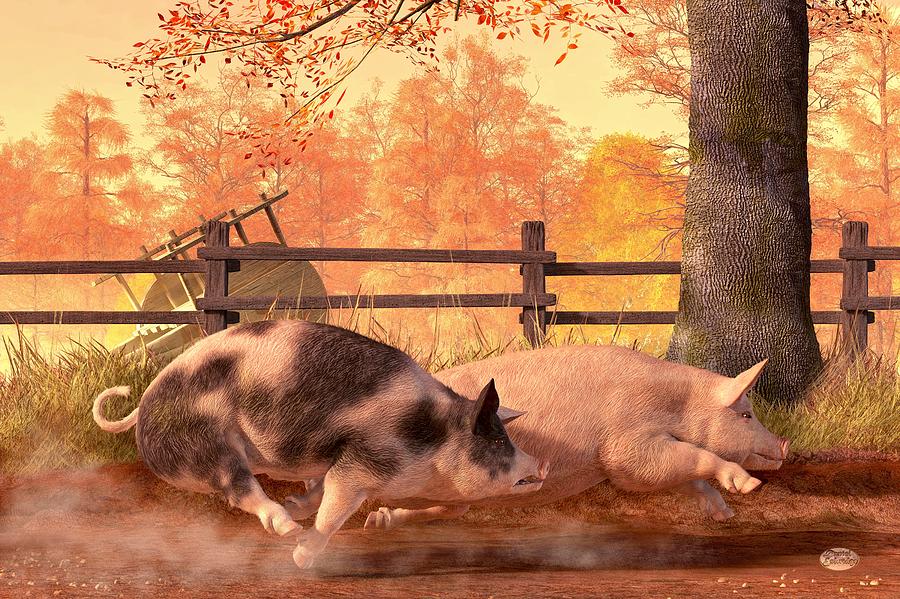 Two Pigs, one pink, the other pink and brown, race down a country road. It's autumn and the trees have red and yellow leaves and the grass has turned a golden brown. A rustic fence lines the rocky strewn track, and behind that rests and old wooden cart. As they pass an ash tree, the speeding hogs kick up a cloud of dust.

I had never heard of pig racing until I went an orchard here in North Georgia. I was visiting was on an early autumn day in October during the Elijay Apple Festival. The orchard had several attractions to help draw crowds away from the town square where the main festival was going on. One of these was their pig race. The competitors in the race were actually piglets rather than adult pigs, but I decided that I preferred full grown hogs in my image to give more of a sense of inertia to them.

It has been a while since I have made any pig art, but I decided it was time for a new pig themed artwork with a rustic feel to it.

These pigs are fantastic! F&V

One of my favorites! This one always makes me smile!

Love it! Beautiful and whimsical at the same time! Most folks don't know how inelegant pigs are or that even the domesticated ones can be vicious, especially sows with piglets! f/l

I saw a pig race once at the fair but it could not hold a torch to yours...What a fabulous and fun creation, Daniel. f/v

Now...this is just fantastic Daniel...oh, my! The race in full swing here...how adorable these pigs are...I hope they both win! Your work is amazing...creative and so wonderfully portrayed...always... f/v

Thanks for the feature, Darren!

I love pigs Daniel and I love viewing your artwork and reading your story descriptions. Great work!

Awesome! It makes me smile...

What a beautiful day for a race! I love your pigs Daniel...an awesome piece and one of my new favorites! LF

Thank you for the laugh, Daniel! This is incredible artwork. l/f

Wow! Thanks for the feature, Greta!

CONGRATULATIONS! This image is now featured on the Homepage of 'Sensational Animals'. You are invited to visit the group and promote this image on the discussion thread regularly, for greater visibility . Bravo for this marvelous art. L/F