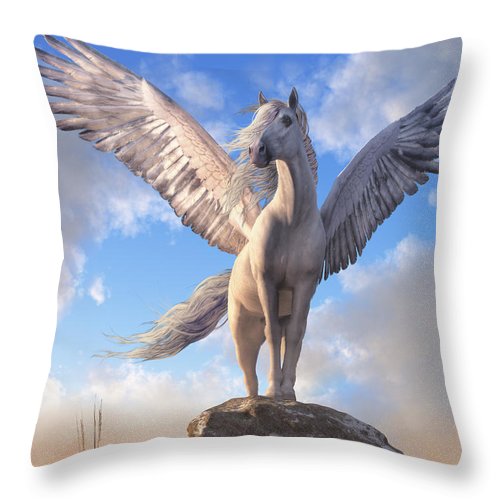 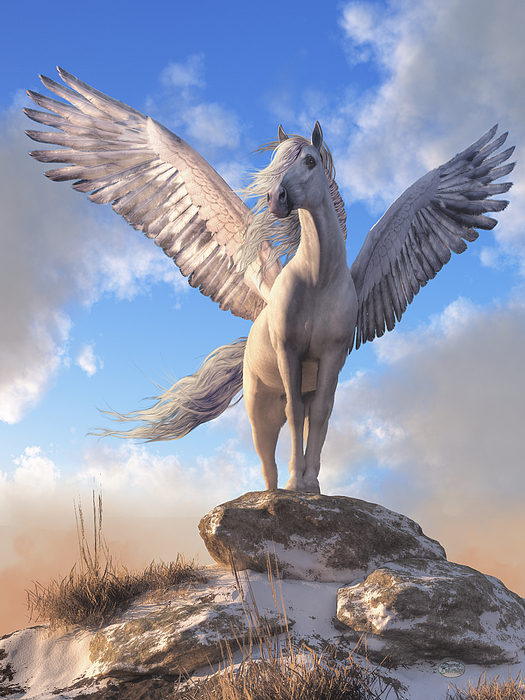 Boundary: Bleed area may not be visible.

Click and drag to re-position the image, if desired.

The image is near the edges of the product but doesn't cover the entire product.   Some of the background color may appear around the outside edges of the image.

Our throw pillows are made from 100% spun polyester poplin fabric and add a stylish statement to any room. Pillows are available in sizes from 14" x 14" up to 26" x 26". Each pillow is printed on both sides (same image) and includes a concealed zipper and removable insert (if selected) for easy cleaning.

Congratulations on your Top Finish in the contest… FANTASY HORSES! Fl

Hello Daniel, all of your horse related digital artwork is astonishingly beautiful. This one is no exception! L/F

Congratulations, Daniel, on your Win in the Mythological Creatures Contest for this wonderful image! Well deserved. Voted.

Congratulations on your 2d place win in the Mythological Creatures contest! voted l/f

Congratulations on your Top Finish in the contest… SCI-FI AND FANTASY! F/L

Congratulations on winning second place for this piece in our Pegasus art contest. This piece is being featured on our blog: https://faafantasyart.blogspot.com/2019/10/pegasus-contest.html

Thanks for the feature, Pamela!

"Pegasus The Winged Horse" The mighty white stallion of Greek mythology stands atop a snowy, rocky mountain top. As the wind blows through his mane and tail, he flexes his white feathery wings. Behind him, light puffy clouds also ride the wind through a dawn sky. Pegasus is one of the most well known creatures from ancient mythology. He was said to be born of the blood of Medusa after she was killed by the hero Perseus and is often associated with Poseidon (who, in addition to being the god of the sea, was also the god of horses). He is also a symbol, appearing in numerous emblems, coats of arms, and logos. I've created a few images featuring Pegasus before with more color in his body and wings, but for this one, I wanted to create a more iconic scene with him in a more solid white coat. Thanks for looking! Daniel Eskridge P.S. Follow me on Facebook: http://www.facebook.com/TheArtOfDanielEskridge

I am a forty-something living in the Metro-Atlanta area -- one of the few people who was actually born and raised here. I'm married and have two sons and a daughter. By day, I am a senior software engineer. But, by night I am a 3D render artist. I have dual degrees from the University of Georgia, one in Computer Science, the other in Fine Art. So, it seems only natural that I attempt to combine the two by producing art using a computer. Plus, I find that it's a bit more practical than painting as it doesn't require all of the clean up, harsh chemicals, or expensive supplies. In fact, I have been a render artist since some of the first ray-tracing programs were made publicly available in the mid 80's. To follow me on facebook CLICK...