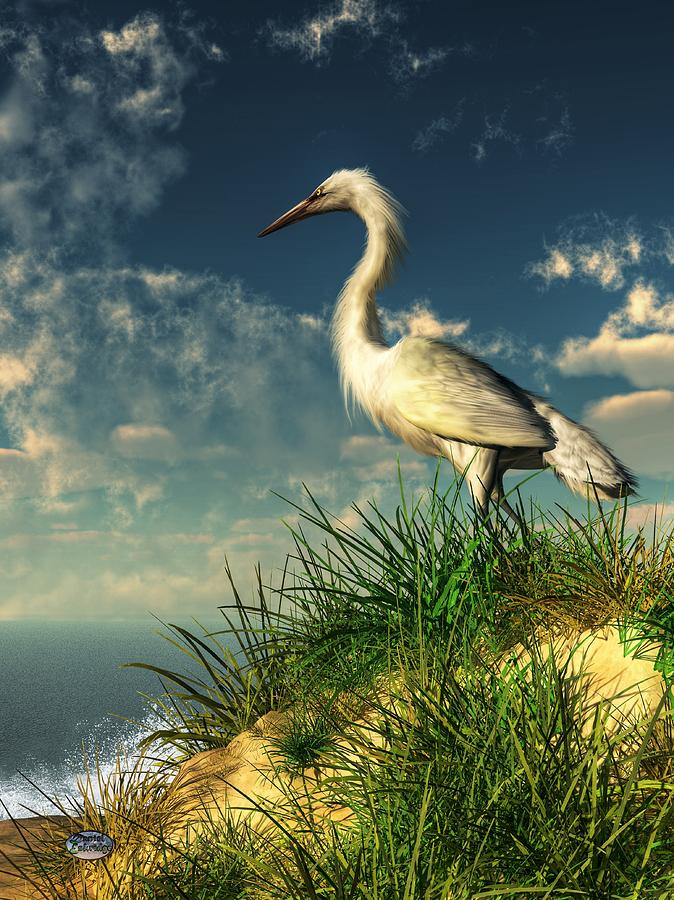 Egret in the Dunes

Egret in the Dunes

A snowy white egret stands atop a grassy sand dune that overlooks the ocean. Below, waves crash against the shore. Above, wisps of clouds dot the deep blue sky. The egret looks out over the water as a sea breeze ruffles its feathers.

This was a quick image inspired by my visit to Siesta Key just to the south of Sarasota, Florida. It's a quiet beach community on the Gulf of Mexico. The northern part has one of the most popular white sand beaches in the world. But we stayed south of the public resorts and were instead in a bird sanctuary. The beach there was small, covered in shells and backed by very grassy dunes, but there were herons, egrets, and sandpipers everywhere.

Rather than traditional forms of art such as painting or photography I use a computer to create my images. It's called 3D Rendering and works like so: I make a scene by sculpting and arranging digital models in a virtual 3D space. After stipulating lighting and atmospheric effects I have the computer create a simulated environment from which I take a virtual snap shot of the scene. Then using image editing software and something more akin to traditional painting techniques (via a Wacom tablet) I go over the work adjusting colors adding brushwork painting in details etc. to produce the final image. Software I use includes: Sculptris ZBrush Blender3d Vue Daz Studio and GIMP.

Congratulations on your Top Finish in the contest! Spectacular! Flt

Gorgeous rendering, Daniel. I am really intrigued by this art form. L/F

Daniel, this is glorious!!!!! I love the rich colors and the light!!! Congratulations on your second place win!!! l/f

The egret is really majestic and stand out beautifully on the contrasted background! Great capture Daniel!

Wonderful capture of the egret and I love the splash of the sea too! v

Thanks for the features, T&C Dailey, Mariola, and Pamela!

it is always with great pleasure to visit and view the wonderful work you do, Daniel...you are the Master of digital art..no doubt! LV

Stunning Daniel, I love it. v/f