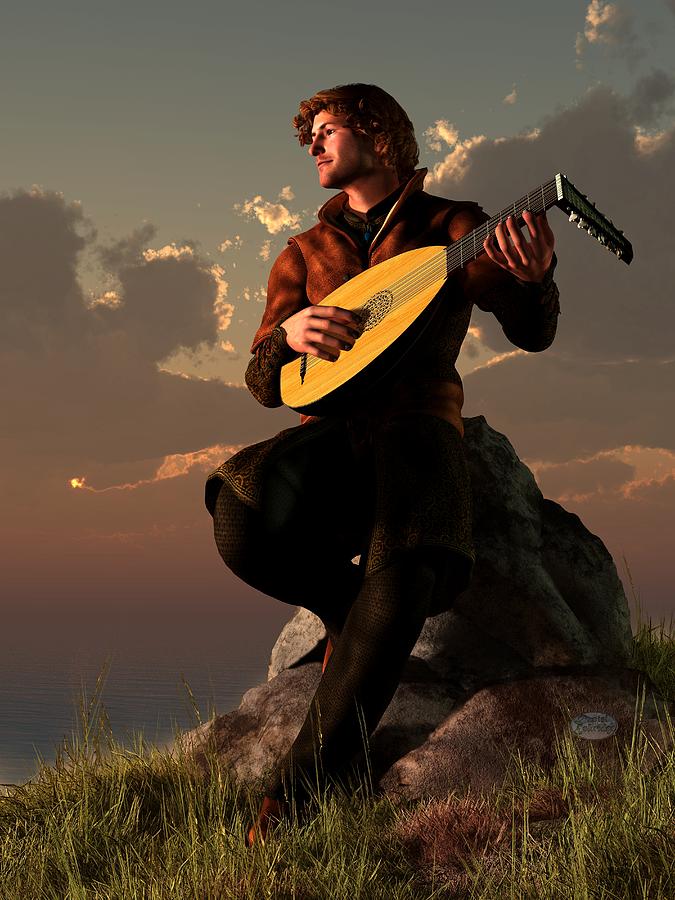 In this artwork, a bard is playing his lute while sitting on a rocky point next to the ocean as the sun sets over the water.

Bards were medieval entertainers, specifically, they were poets employed by wealthy patrons. Some famous bards were Aneirin, Taliesin, and the MacMhuirichs. The term, however, has a more generic meaning in modern culture and is synonymous with minstrel, skald, scop, musician, troubadour, storyteller or just entertainer.

Nowadays, bards are perhaps best known as a player class in many role playing games. If fact, when I was a kid, I played a bit of Dungeons and Dragons. The bard was a favorite character type among many of my friends. As their specialty was in socializing rather than combat, magic, or stealing, the bard worked well for the players who were more into the role playing and story development of the game rather than just the combat and exploration aspects. When RPG video games came along, the bard didn't go over so well. The computer lacked the interactivity and imagination to deal with the bard the way a human game master would. I haven't played video games in over a decade, so perhaps the computer AI has developed enough since then that the bard can work again. Regardless, they can make for some really nice art.

Congratulations on your sale Daniel!

"Now we all know, the Bards and there songs..." lol sorry i just picture him singing that piece of a song i know. Anyway the artwork is just beautiful. Looking at it makes me wish Bards were still around.

here I am in your enchanted land again, and I have found my prince... beautiful...v/f

Thanks for the feature, Vitaliy!

This is a wonderful image Daniel and description! I can hear the music floating out over the ocean! fv

Very cool! This brings a smile to my face, Daniel. f/v

I love his pose! Very dreamy setting, I can almost hear the music!

you have such a sense of divine inspiration here, daniel!