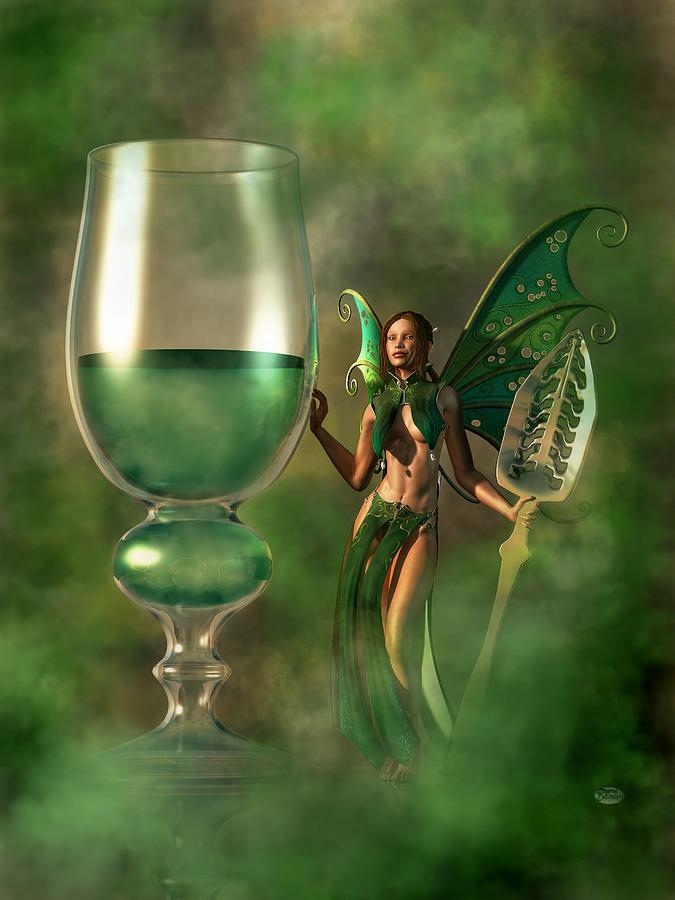 Absinthe, sometimes called the Green Fairy, is a distilled alcoholic beverage that is made from various parts of plants, most notably wormwood, anise, and fennel. It is very strong and tastes like licorice.

You generally drink it by dumping a shot of the liquor into a glass, then dribbling four or five ounces of water onto a sugar cube held over the liquor with a special slotted spoon. Some people like to first soak the sugar cube in a bit of absinthe, light it on fire, then pour the water over it once the sugar caramelizes (I would not recommend this though as it is a good way to burn your house down if you screw it up).

Absinthe holds a special place in art. Absinthe drinking was a popular past time of artists and as well as a subject of many of their paintings during the height of the Romantic and Impressionist art movement in France. Shortly after, the drink was made illegal, partly due to the destructive nature it had on people's lives, but also because it cut into wine profits. It has recently made a comeback, though it can be quite expensive.

I've tried it a few times. It tastes okay, but I still rather spend my money on a good craft beer.

Rather than traditional forms of art such as painting or photography I use a computer to create my images. It's called 3D Rendering and works like so: I make a scene by sculpting and arranging digital models in a virtual 3D space. After stipulating lighting and atmospheric effects I have the computer create a simulated environment from which I take a virtual snap shot of the scene. Then using image editing software and something more akin to traditional painting techniques (via a Wacom tablet) I go over the work adjusting colors adding brushwork painting in details etc. to produce the final image. Software I use includes: Sculptris ZBrush Blender3d Vue Daz Studio and GIMP.

Bravo on your sale Daniel~

Great! Congrats on your sale!

Thank you for participating in my contest. Great work. L

Superb piece. Your creative vision takes me on a ride I really enjoy. f/v

Love it! L/F Am tweeting this to my followers!

Thanks for the feature, Lesa!

Very good idea to create a picture like this with Absinthe, beautifully done!